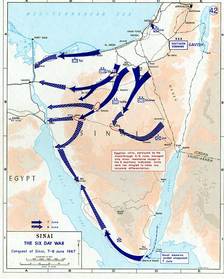 - 1967 Nasser expels the U.N. Peacekeeping force from the Canal zone
- Egyptians close the straits to the Israelis and mass troops on the border
- Israelis with the help of intelligence know of the attack and follow through with first-strike policy
- Destroy the Egyptian airforce, take Sinai pennisula, Golan Heights, and West Bank (Whole war lasts 6 days)
- USA needs to step in to halt attacks in fear of angering the other Arab nations
Question: What if the straits to Israel were never closed?

The Six-Day War was fought between June 5 and 10, 1967, by Israel and the neighboring states of Egypt (known at the time as the United Arab Republic), Jordan, Lebanon and Syria. In a matter of only 6 days, Israel takes over numerous egyptian territories.