"I've never doubted that apartheid - because it was of itself fundamentally, intrinsically evil - was going to bite the dust eventually"
- Desmond Tutu 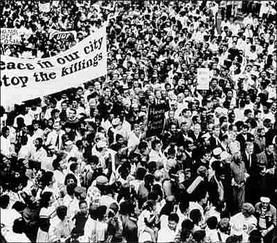 - All-white National Party comes to power in 1948
- Apartheid (separate or apart) was their main agenda
- A doctrine of white supremacy and separate development
- Non-whites South Africans could no longer:
- Marry outside of their own race
- Choose where to live
- Travel where they liked
- The whites made up 15% of the population yet owned 87% of the land
- Non-whites were forced to live on Bantustans
- Enforced by the army and police force

Question: What if the All-white National Party never came into power?

Apartheid was a system of racial segregation enforced by the National Party (NP) governments that ruled South Africa from 1948 to 1994. It was developed after World War II by the Afrikaner-dominated National Party and Broederbond organizations.