"That freedom can never be attained by a nation without suffering and sacrifice has been amply borne out by the recent tragic happenings in this subcontinent."
- Muhammad Ali Jinnah 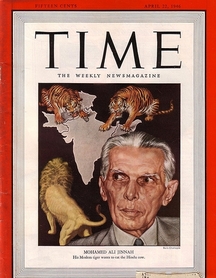 - Jinnah chosen to administer the Muslim sections of the partition
- Worked toward unity
- Eventually forms the Muslim League asking for separate country (Pakistan movement)
- Death on Sept. 11 celebrated as national holiday in Pakistan

Question: If Jinnah had never been successful in forming the Muslim League and creating Pakistan, what conflicts would have resulted?

Muhammad Ali Jinnah was a lawyer, politician and statesman, and the founder of Pakistan. Jinnah served as leader of the All-India Muslim League from 1913 until Pakistan's independence on 14 August 1947, and as Pakistan's first Governor-General from independence until his death.