"Who are our enemies? Who are our friends? This is a question of the first importance for the revolution"
- Mao Zedong 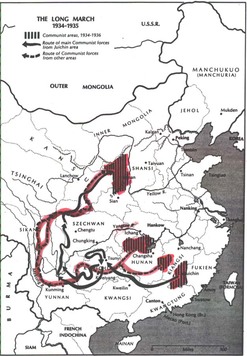 - Mao led his Red Army on a 9,000 km retreat across China
- Lost 3/4ths of his army
- Settle in the north (Shensi) where he forms the Yenan Soviet
- CCP began to gain power due to their resistance of the Japanese
- Kuomintang was more worried about fighting the CCP 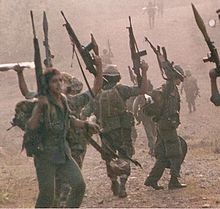 - Act quickly for decisive conclusions to battle
- Concentrate forces
- Take advantage of enemies limitations (ie. Being a foreigner, having limited resources)
- Ability to move quickly
- Being Flexible
- Using hit and run tactics
- Use the locals for help

Question: What if the armies of the communist party of china had not escaped from the chinese nationalist party armies?

The Long March was a military retreat undertaken by the Red Army of the Communist Party of China  to evade the pursuit of the Kuomintang army. This was a series of marches as various Communist armies in the south escaped to the north and west.

Guerrilla warfare is a form of irregular warfare in which a small group of combatants of usually armed civilians use military tactics, such as ambushes, sabotage, raids, petty warfare, the element of surprise, and extraordinary mobility to dominate a larger and less-mobile traditional army, or strike a vulnerable target, then quickly withdraw.