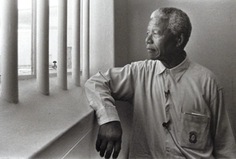 "A good head and a good heart are always a formidable combination."
- Nelson Mandela

- Became the leader of the African National Congress
- Was arrested in 1964 and put in prison for life
- Was let out in 1990
- Won a nobel peace prize in 1993
- Elected as President of South Africa (first black ever) in 1994 (F.W. de Klerk his jailer was his deputy president)

Question: What impact would Nelson Mandela never becoming leader of the ANC have on the country of South Africa and the rest of the world?

Nelson Rolihlahla Mandela is a South African anti-apartheid revolutionary and politician who served as the first black President of South Africa from 1994 to 1999. He focused on dismantling the legacy of apartheid through tackling institutionalised racism, poverty and inequality, and fostering racial reconciliation