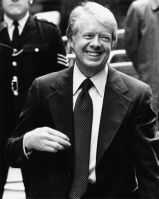 - U.S. President Jimmy Carter hosted a Peace Treaty between the Egyptians and Israelis at his retreat
- They agreed to:
- Not make war
- Negotiate the refugee problem
- Israel could use the Suez Canal
- Israel would get their supply of oil from Egypt
- The result of this was the Egyptians got expelled from OPEC
Question: What if the Peace Treaty had never been hosted?

The Camp David Accords were the result of 14 months of easy diplomatic efforts by Egypt, Israel, and the United States that began after Jimmy Carter became President. Efforts initially focused on a comprehensive resolution of disputes between Israel and the Arab countries, gradually evolved into a search for a bilateral agreement between Israel and Egypt. They were signed by Egyptian President Anwar El Sadat and Israeli Prime Minister Menachem Begin on 17 September 1978, following thirteen days of secret negotiations at Camp David. The two framework agreements were signed at theWhite House, and were witnessed by United States President Jimmy Carter.