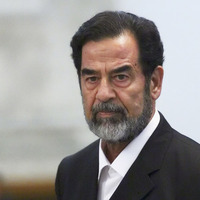 "Fight them with your faith in God, fight them in defense of every free honorable woman and every innocent child, and in defense of the values of manhood and the military honor...Fight them because with their defeat you will be at the last entrance of the conquest of all conquests. The war will end with...dignity, glory, and triumph for your people, army, and nation."
- Saddam Hussein, Radio Broadcast, January 19, 1991 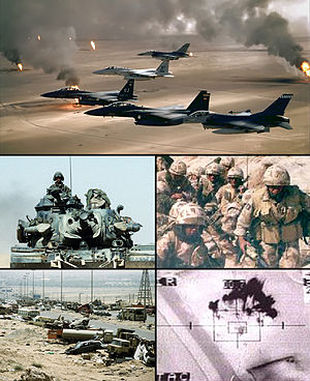 - Aug. 1990 Iraq invades Kuwait
- “No more Munichs” proclaimed by George Bush Sr. and place sanctions on Iraq to pull out
- 30 countries join in a coalition against Iraq (including some Arab countries)
- USA made sure Israel wouldn’t join for fear of losing the Arab support
- Kuwait liberated after 4 days (90,000 Iraqi casualties)
- Bush did not invade Iraq or remove Saddam in fear of losing the Arab support
- Threat of poison and gas high
- Saddam tried to get Israelis involved by firing SCUD missiles at them
Question: What would have happened if Israel had fired back against Iraq's SCUD missiles?

The Gulf war, lasting from August 2nd 1990 - February 28, 1991 codenamed "Operation Desert Storm" was a war forged by a UN authorized Coalition Force composed of 34 Nations led by the US, against Iraq. This was in response to Iraq's invasion and annexation of Kuwait.