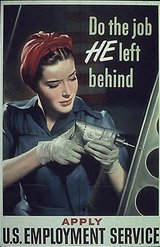 "Women who stepped up were measured as citizens of the nation, not as women.. This was a peoples war and everyone was in it."
- Colonel Oveta Culp Hobby 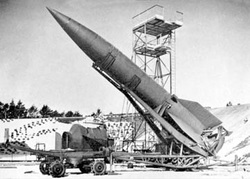 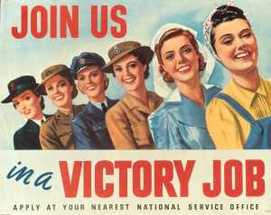 - Much like WWI, women ran the factories and industry
- Not limited to a certain age
- Helped with equality
- Worked as:
- Nurses
- Flight transporters
- Couldn't actually fly, however were permitted to fly from NA to GBR and take a boat back
- Radar and communications operators

Advances in technology in WWII revolutionized the way in which war was practiced leading to the practice of total war in which everyone was involved in the war in one way or another. The introduction of  V1 and V2 Rockets (i.e. buzz bombs), Long Range Aircrafts, Jet Aircraft, Helicopters, Nuclear Bombs and Communications Advances helped in this advanced technological revolution. With the war and the advances in technology along the way, the integration of women into the work force as they began running the economy, helped with equality as they too, were employed, helping out with the war effort which was admirable to many.