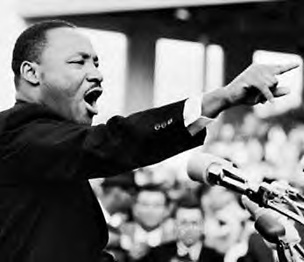 - He first becomes prominent in 1955 organizing a boycott of the transit system over the jailing of Rosa Parks (The company went bankrupt)
- Becomes unofficial leader of the black protest movement
- Advocated peaceful demonstrations
- Blacks saw their cause gaining sympathy when they were shown to be beaten by police on T.V.
- Made famous, “I have a dream” speech in Washington in 1963
- Awarded Nobel Peace Prize in 1967
- Assassinated in 1968

Question: What further steps would have been taken if King was never assassinated? Did his assassination help the cause he was fighting for?

Martin Luther King, Jr. was an American clergyman, activist, and leader in the African-American Civil Rights Movement. He is popular for his role in the advancement of civil rights using nonviolent civil disobedience including peaceful demonstrations. His speech "I Have a Dream" in Washington in 1963 was made famous, and he was awarded the Nobel Peace Prize for his leadership in this movement.