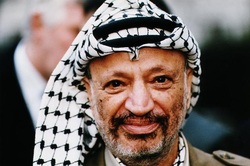 "If Israel rejects our demands there will be a reaction and we have a 30,000 man armed force."
- Yasser Arafat

- The militant arm of the PLO is called Fatah
- Leads hijackings of planes (3 blown up on the runway in Jordan in 1970)
- Most recognized were the attacks on Israeli athletes at the 1972 Munich Olympics
- Arafat claimed to have nothing to do with the attack
- Israeli Prime Minister, Golda Meir responded with Operation Sword of Gideon
- They lead many intifadas in the following years 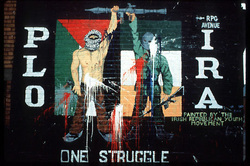 - 500,000 Palestinian refugees living in south Lebanon conduct terrorist attacks on Israel (PLO)
- Israel invades Lebanon as far as Beirut in 1982
- Multinational force sent in to restore order (PLO women are massacred)
- Syria invades in 1987
- PLO eventually agrees to withdraw
- 1991 a cease fire was signed although Syrian troops remained in Lebanon
- Attacks still launched on Israel from Golan Heights area
Question: What if terrorist attacks were never made on Israel?

The Palestine Liberation Organization (PLO) is an organization that was created in 1964 with the purpose of creating an independent State of Palestine. It is recognized as the "sole legitimate representative of the Palestinian people" by the United Nations and over 100 states with which it holds diplomatic relations, and has enjoyed observer status at the United Nations since 1974.