"The emblem of the African National Congress has always been and remains an important visual expression of the hardship, resilience and triumph of the African people. The ANC logo is a symbol of hope and progressive thinking and occupies a special place in the hearts of the majority of South Africans.."
- MAIL AND GUARDIAN 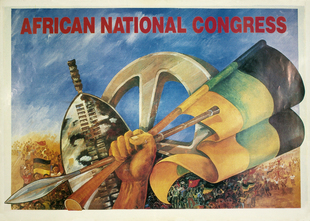 - The most prominent resistance to Apartheid
- Leaders were often jailed
- Wanted to create a non-racial democracy
- The National Party portrayed the ANC as a Communist organization
- “The Soviet Union did provide education and military training, but were never really interested in S.A.”

Question: What would result if the ANC was never organized and their was no official opposition to Apartheid?

The African National Congress  is South Africa's governing political party since the establishment of non-racial democracy in April 1994. It defines itself as a "disciplined force of the left". John Dube, its first president, and poet and author Sol Plaatje were among its founding members.