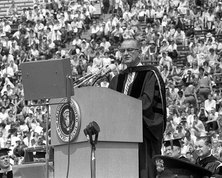 "The Great Society rests on abundance and liberty for all. It demands an end to poverty and racial injustice, to which we are totally committed in our time. But that is just the beginning."
- Lyndon B. Johnson 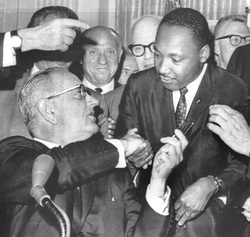 - Johnson convinces congress to pass Kennedy’s Civil Rights Bill
- It allowed the gov’t to cut off funding to any program that practiced discrimination
- Created VISTA to battle poverty
- The Voting Rights Act: Outlawed the literacy tests needed in order to register to vote

Question: What if President Johnson had not been in favour of anti-discrimination?

The Great Society was a set of domestic programs in the United States announced by President Lyndon B. Johnson at Ohio University. Two main goals of this were to eliminate poverty and racial injustice.