"Be peaceful, be courteous, obey the law, respect everyone; but if someone puts his hand on you, send him to the cemetery"
- Malcolm X 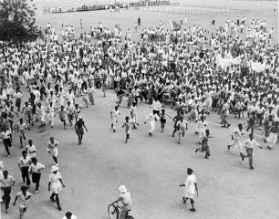 - Became the leader of the black Muslims in the USA
- Blacks rejected Christianity as a ‘white’ religion
- He had contempt for those who followed Martin Luther King’s pacifist methods
- He believed blacks needed to protest with force
- Assassinated in 1965, possibly because of his disputes with the black Muslim Movement

Question: what if malcom x never became the leader of the black muslims?

While youth throughout the city were being drafted to fight in the Vietnam War, funding for education and youth programs were being cut, and policing tactics were targeting African-American youth. This led to a series of protests and Race Riots.

Malcom X was an African-American Muslim minister and human rights activist. He was a courageous advocate for the rights of blacks, a man who indicted white America in the harshest terms for its crimes against black Americans. Detractors accused him of preaching racism, black supremacy, and violence. He has been called one of the greatest and most influential African Americans in history.