“Allah is on our side. That is why we will beat the aggressor.”
- Saddam Hussein 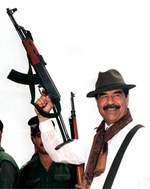 - Sunni leader of Iraq
- Chosen by the CIA as a pro-American and helped brought to power 1968
- Worried about the spread of Shiite Islam
- Harsh on his own country (Kurds and 65% Shiite nation)
- Claimed Kuwait to start the first Gulf War
- Used poison gas on the Kurds in the north
Question: What if Saddam Hussein had never been elected leader?

Saddam Hussein was the 5th president of Iraq, serving from from 16 July 1979 until 9 April 2003. He claimed Kuwait to start the first Gulf War and was famous for his burtality. He had sons that were said to be just as, or even worse than himself.