"The impossible men of India shall rise and liberate their Motherland"
- Mahatma Gandhi, following the Amritsar Massacre 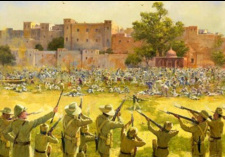 Question: what if the protesters had been armed?

The Amritsar massacre took place in the Jallianwala Bagh public garden in the northern Indian city of Amritsar on 13 April 1919. The shooting that took place was ordered by Brigadier-General Reginald E.H. Dyer. The response to this brought the world to pay attention to this cause and pick up movement. Gandhi Led this movement.