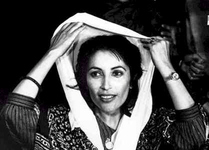 "The next few months are critical to Pakistan's future direction as a democratic state committed to promoting peace, fighting terrorism and working for social justice."
- Benazir Bhutto 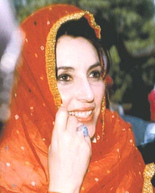 - Leader of resistance of the military regime in Pakistan
- First woman to lead an Islamic state
- Focused on:
- Improving health
- Social welfare
- Education for the underprivileged
- Assassinated on Dec. 26th 2007

Question: Should Benazir Bhutto have been a man, would her assassination have still occurred?

Benazir Bhutto was a politician and stateswoman who served as the 11th Prime Minister of Pakistan in two non-consecutive terms from November 1988 until October 1990, and 1993 until her final dismissal on November 1996. She was the eldest daughter of Zulfikar Ali Bhutto, a former prime minister of Pakistan and the founder of the Pakistan People's Party (PPP), which she led.