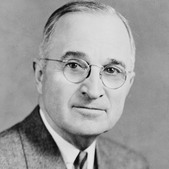 "I believe that it must be the policy of the United States to support free peoples who are resisting attempted subjugation by armed minorities or by outside pressures. I believe that we must assist free peoples to work out their own destinies in their own way."
- Harry S. Truman Speech to Congress, March 12, 1947 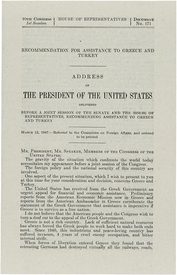 - Doctrine of Containment
- Not going to let Communism spread
- Implemented when G.B. decided to pull out of Greece
- 400 mil. Dollars pledged to Greece and Turkey to prevent expansion of Communism
- Occurred due to the fear of a domino theory
- It became a mantra for American policy throughout the world to stop the spread of Communism
- “Line in the Sand” 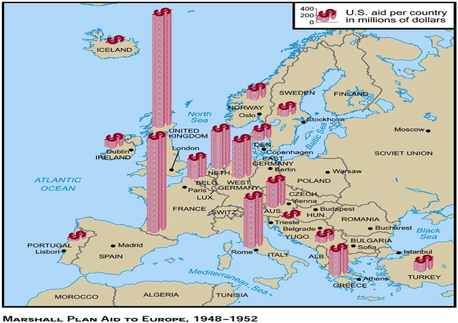 - George C. Marshall, secretary of state proposed aid to rebuild western Europe
- Sixteen nations applied for the aid to be handed out over 4 years
- Also helped limit expansion of Communism
- The US govt. blocked the aid until Czechoslovakia was taken over in 1948

The Division of Germany and Berlin 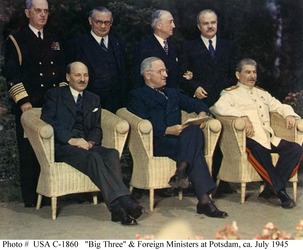 - Potsdam conference had decided the division of Germany
- Divided into 4 occupation zones under control of Allied Control Council
- 1947 US and GB join their zones.  (France joins in 1948 to form West Germany (est. 1949) (Federal Republic of Germany led by Konrad Adenhauer)
- Stalin forms East Germany with his zone the same year (German Democratic Republic (GDR)
- Western half of Germany rebuilt their city promptly whereas the Eastern half did not. No lighting.
- East side shows that communism was to be very difficult to live with
- West Democratic
- East Communist
- People started moving west leading to the "Brain Drain" of people moving away from the East (Educated People)
- Less educated and less wealthy people stayed in East Germany as they knew that they would be provided for

The purpose of the Truman Doctrine was to be used as a doctrine of containment in which the USA economically assisted Greece and Turkey to help prevent the spread of Communism and became a mantra  for American policy throughout the world to stop the spread of Communism. The Marshall Plan was the aid of 16 nations to help rebuilt Western Europe and prevent the expansion of communism.