"Fear is, I believe, a most effective tool in destroying the soul of an individual - and the soul of a people."
- Anwar Sadat 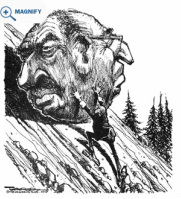 - Replaces Nasser as the leader of Egypt in 1970
- Kicks out the Soviet advisors in 1972
- He felt they could not align with the atheist Soviets
- Planned for the Yom Kippur War, 1973
- Eventually turned into a dove and won a Nobel Peace prize for going to Israel and asking for peace in 1977 (leading to the Camp David Accords)
Question: What if Anwar Sadat had not been assassinated?

Anwar El Sadat was the third President of Egypt, serving from 15 October 1970 until his assassination by fundamentalist army officers on 6 October 1981. In his eleven years as president, he departed Egypt from some of the economic and political principles of Nasserism by re-instituting the multi-party system and launching the Infitah economic policy.