The Israeli war of INDEPENDENCE, 1948 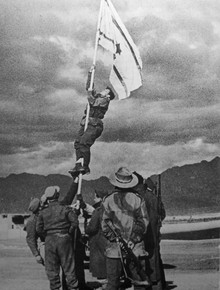 - Background to the war:
- Holocaust and persecution of Jews in Europe leads to many of them leaving to Israel
- Arab League is formed in 1945 to protest the Balfour Declaration
- France gives Syria and Lebanon independence in 1946
- British fall out of favour with the Jews under the guidance of the Zionist movement (A homeland had not been created yet)
- The Brits hand the problem over to the UN in 1947
- 1947 the UN suggests a partition.
- Jews are happy with this the Arabs are angry
- Arab radicals had attacked Jews throughout 1947
- The Arab League had rumours of attacking the Jews once the Brits left.
- The day the mandate ends the Jews under David Ben-Gurion attack the Arab League countries
- The Jews win and increase their territory from the parition including the Negev
Desert
- Many Palestinians became refugees
- Palestinians begin terrorist attacks within Israel
Question: What if the Holocaust never happened, and the Jews never fled to Israel?

The 1948 Arab–Israeli War or the First Arab–Israeli War was fought between the State of Israel and a military coalition of Arab states and Palestinian Arab forces. This war was the second stage of the 1948 Palestine war.