"Half measures are no good in this wilderness any more than a leaking boat is any good in an ocean. One needs certainty, a sense of security, something solid to hold on to in the dangerous void - and it has to be absolutely solid."
- Alan Moorehead 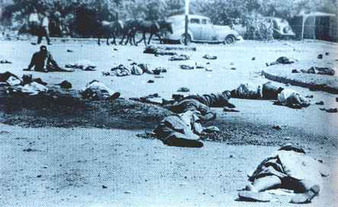 - In 1960 blacks formed outside a police station in Sharpeville to protest the pass laws
- They burnt their reference books
- The police opened fire on the crowd
- 67 demonstrators were killed
- The ANC was outlawed
- This ended the non-violence movements
- An underground organization sprung up that engaged in terrorist attacks against symbolic targets
- SA gov’t passed a law where police could arrest without warrant
- 1964, Nelson Mandela, leader of the ANC is arrested for life in prison

Question: Had the police responded in a non-violent pacifist manner, what would have instead resulted of the protest?

The Sharpeville massacre (1960) was when South African police killed a total of 69 people at a protest in the South African township of Sharpeville. March 21 is now celebrated as a public holiday honouring human rights in order to commemorate the massacre.