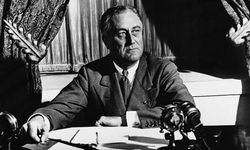 "With confidence in our armed forces - with the unbounding determination of our people - we will gain the inevitable triumph - so help us God."
- Franklin Roosevelt 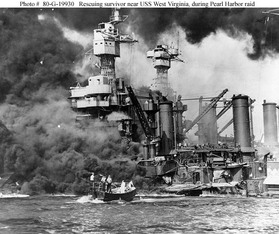 - Dec.7, 1941 – Japanese attack on US Naval Base in Hawaii
- Surprise attack
- Not intended to put USA into war
- They thought U.S would be too “soft” to reclaim that territory
- Objective: sink and immobilize U.S. battleships and carriers
- Eight battleships were damaged, two were lost and three were absent during the raid.
- It almost succeeded
- Japanese failures:
- Oil depots weren’t destroyed
- Aircraft carriers are absent
- Submarine pens weren't destroyed
- USA declares war on Japan
- Hitler declares war on USA on Dec. 10 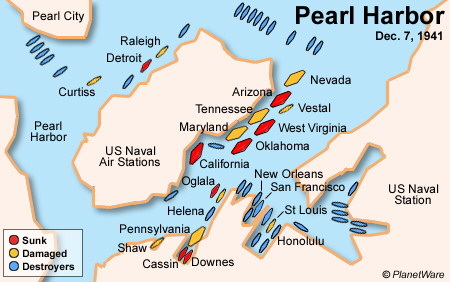 On December 7, 1941, a Japanese attack on a US naval base in Hawaii with the objective to sink and immobilize US battleships and carriers took place. Though battleships were damaged, the Japanese failed to destroy oil deposits, aircraft carriers and submarine pens and the US chose to retaliate and declare war on Japan who had "woken a sleeping giant". On December 10, shortly after the attack when the US came out of isolationism, Hitler declares war of the States.