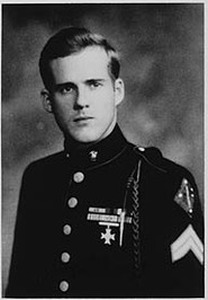 “The Japanese fought to win - it was a savage, brutal, inhumane, exhausting and dirty business. Our commanders knew that if we were to win and survive, we must be trained realistically for it whether we liked it or not. In the post-war years, the U.S. Marine Corps came in for a great deal of undeserved criticism in my opinion, from well-meaning persons who did not comprehend the magnitude of stress and horror that combat can be. The technology that developed the rifle barrel, the machine gun and high explosive shells has turned war into prolonged, subhuman slaughter. Men must be trained realistically if they are to survive it without breaking, mentally and physically.”
- Eugene B. Sledge

- Invasion of these Islands which belonged to Japan
- From these bases Americans could fly and return with bombers to bomb Tokyo
- Men fought to the death and very few prisoners
- Kamikazes active
- Fire bombing of Tokyo after islands taken
- Planned attack made up of three waves
1) Heavy Bombs dropped to blow up gas and water (infrastructure)
2) Insingery Bombs
3) Shrapnel Bombs (Killed those who attempted to put out fires)
- One of the most devastating bombing raids in war
- 150,000 causalities (Worse than that of the Atomic Bomb)
- Also done in Hamburg, Germany
- Invasion of Japan estimated to take 1 million American casualties 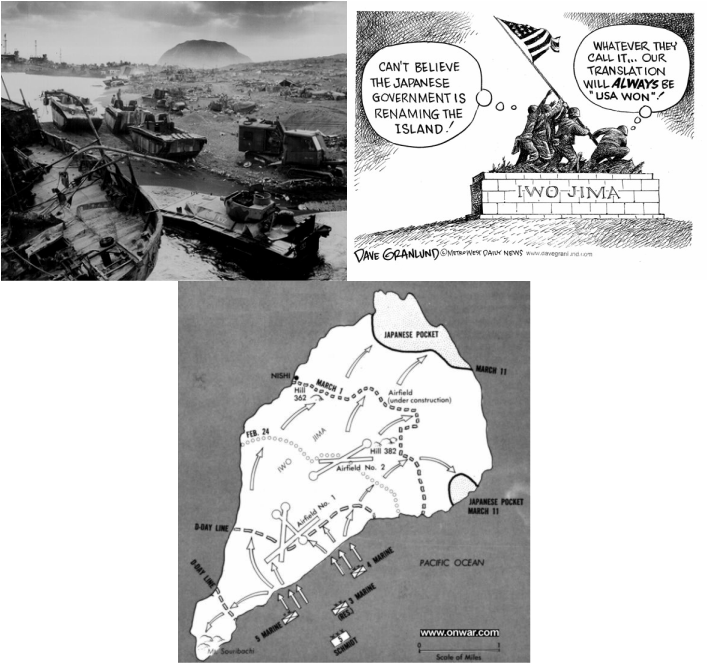 The Islands of Iwo Jima & Okinawa were invaded by the American military and destroyed. Tokyo was fire bombed through the use of Heavy Bombs, Insingery Bombs, and Shrapnel Bombs.  Kamikazes were also active at this time and chaos had been wreaked. The fire bombing was seen to be one of the most devastating bombing raids in all of war with causalities exceeding those consequence of the Atomic Bomb. The invasion of Japan is estimated to have taken at least 1 million American causalities.